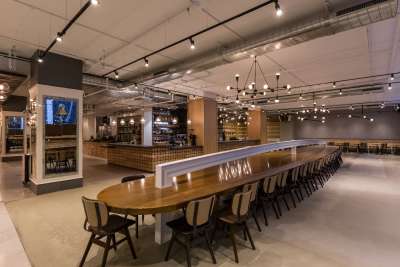 If you have been contemplating opening a new restaurant concept, then you need to get up to speed on the food hall revolution.

Not to be confused with mall food courts from the last few decades, food halls are a new concept blending passionate chefs, upscale and eclectic fare, and communal dining.  Food halls permit diners to roam from one food stall to the next, browsing cured meats at one and smelling the Asian hot pots at another, and ultimately selecting from an extensive variety of fresh, unique cuisines.  In many food halls, consumers even bring checklists, eager to taste the unusual dishes touted in local news and social media.

Food halls are sprouting up in cities across the United States and abroad, attracting generations ranging from millennials to the baby boomers, and everyone in between.  The Pine Street Market in Portland, Oregon, Eataly in New York, and Anthony Bourdain's highly anticipated market at Pier 57 in New York City are generating lots of buzz.  Housed in older, refurbished buildings, the Ponce City Market in Atlanta and the Ferry Building North Arcade in San Francisco, merge historical architecture with gourmet culinary options.  In addition, streamlined, functional food halls are now opening where mall food courts once stood.

The beauty in the food halls is the abundance of local, fresh, artisanal food prepared by leading restaurateurs in a casual atmosphere where customers can select from multiple food options, and then meet in the dining area to eat and converse.  Chefs have the ability to specialize in eclectic cuisine, operating out of small, sleek spaces.

Talented chefs and developers love food halls because they can quickly launch a new food concept with a much lower risk than opening up a full service restaurant.  The setup is similar to a start-up business operating out of an incubator space.   Many of the mini-restaurant spaces are small, starting at just 150 square feet.  Some food halls even have common food prep and kitchen spaces to keep the prices low for the restaurant owners.

Consumer demand for fresh, unique fare combined with increasing population density in urban areas is supporting the rise in food halls.  Consumers also crave the element of discovery, finding unusual delicacies and sharing these experiences with friends and family.

Restaurant Design & Construction has been underway in South Florida.  Opening this summer, CentralFare in Miami will be the area's first food hall.  Authentic, diverse foods will be served up by renowned chefs and inspiring restaurateurs at 20 unique food spaces in its 50,000 square feet location.  The varied list of restaurants include Monger by Voltaggio Brothers of Bravo’s “Top Chef”, Blackbrick by Richard Hales, and Miami Smokers owned by and Andres Barrientos and James Bowers.  Azucar Ice Cream Company, Doggi’s by Yoleida Galiano and sons, and Romanicos Chocolate, among others, will also open their doors in downtown Miami's CentralFare this summer.

Restaurant construction is happening for the next Miami food hall, Brickell City Centre, which is a slated to open in the fall of 2017.  The 38,000 square feet food hall space will be divided among three stories of Italian-inspired eateries.

Food Halls and YOU

It's clear that food halls are poised for growth in 2017 and the next decade.  Food halls are "hot" in the restaurant industry, bringing together local talent, artisanal products, and eager consumers.  Once you get a taste of the new food halls, you won't want to miss the fun!  What will be your role in the future of food halls?  Will you enjoy the eclectic cuisine as a consumer?   Or will you get in the action?  Are you ready to explore options for your new restaurant concept?

StoreTech+co is committed to designing, building and bringing your