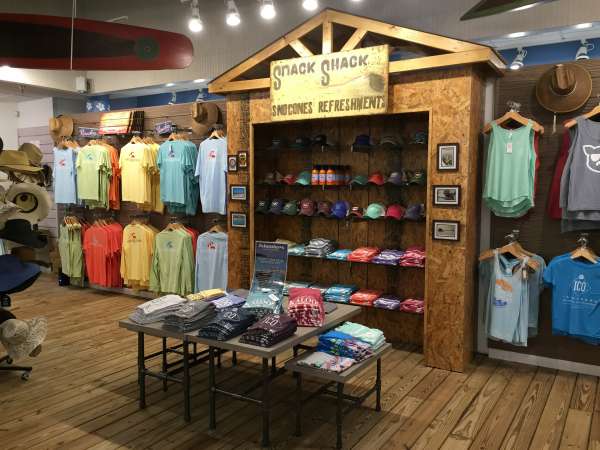 A fun, challenging and enjoyable project that included the redesign of Islanders Coastal Outfitter's interior space.

StoreTech+co first met John, owner of Islanders, along with the Islanders team during the January 2016 Surf Show in Orlando, FL. At that time, John felt the store had lost its edge and was in need of a refresh/renovation.

During the show John spoke with Glenn, President & CEO of StoreTech+co, and shared both his thoughts and goals. John strongly agreed that the job could not be piece-meal, that it was necessary to work with and from a plan that encompassed his current challenges, his competition and his goals. Glenn had many ideas and one unique, creative, new key idea was drawn on a napkin and eventually it would and has become the focal point of the store.

Glenn visited and saw first-hand the store, met with the team and listened to their challenges, their thoughts, direction and ideas. He visited the area competition and shared with John his findings along with incoming trends that needed to be incorporated.

With everyone on the same page, Glenn returned and worked with the StoreTech+co design team creating drawings, 3D models and product charts. StoreTech+co worked diligently with the Islanders team and once the final design, and custom displays were confirmed, a construction and installation schedule was agreed determined.

During the renovation and upgrade process, StoreTech+co installed custom displays along with a new POS system. The shark that was initially visioned to become an eye-catching centerpiece of the store was carefully moved and placed over a new crescent shaped custom display.

The store has been met with rave reviews with much of the local community coming in to see the renovations and to support the long standing local business. Beachgoers have even heard about “The Shark” and come in off the beach to take pictures and post on social media.

With the store’s new design, custom new retail store displays and new merchandise, Islanders Coastal Outfitter's business has increased month-over-month and now John is in discussion with StoreTech+co to possibly begin building out a second location.

Checkout the photos below which include BEFORE pictures on the top row along with detailed pictures of THE SHARK.